What are the goals of your mission as a new Ambassador of Hungary in Finland for the next three – four years you are going to stay in our country? 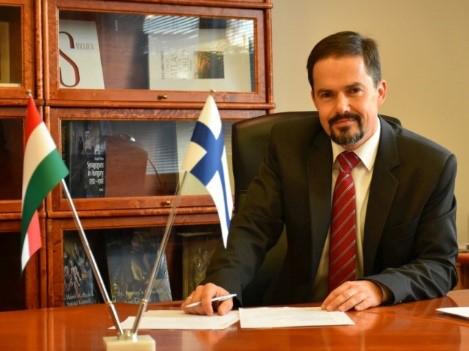 The relations between Finland and Hungary are traditionally good; for example, there has always been a lively cultural cooperation between the two countries, and of course, the recognition of language relationship has created close ties for Finns and Hungarians. Despite these facts, foreign trade and investment relations between Finland and Hungary have been sluggish in recent years. The Finnish FDI value in Hungary has been decreasing for several years. My main goal is to turn back this progress.

How have Finland and Hungary changed since you were here for the first time and how do you see the future of our economies?

Finland has become even more international, open and reliant on foreign trade as well. Well-educated labour force and innovation has become even more important for business ventures. These are positive changes for Hungary, too, for we have also recently focussed more on inventions, research and developments as the main driving forces in our economy. Knowledge-based business cooperation is more than a wishful thinking, it is a must. Given the excellent education systems in both countries, I am really upbeat about the opportunities in this regard.

We have noticed that Denmark has invested 700 million euros as foreign direct investments in Hungary and Finland 41 million euros. Please, tell us why is this possible and what are your plans to get Finnish enterprises to invest more in Hungary?

For more than a decade, Finnish foreign direct investments to Hungary were strongly related to Nokia. This flagship of the Finnish economy has played a key role in increasing Finnish FDI stock in Hungary to 1 billion euros towards 2010. However, when Nokia was forced to sell its plant in the northern Hungarian town of Komárom due to a downturn in global demand for its products in 2012, it also resulted in a huge Finnish FDI outflow. Nokia still runs a very successful R&D centre in Budapest, Hungary, and this serves as Hungary’s No 1. research and development centre in the business sector. Some other Finnish companies also run profitable subsidiaries in Hungary, but there is also a lot of untapped potential in many business areas. Hungary offers a very stable and predictable business environment for Finnish companies with fast economic growth, political stability, low taxes, excellent infrastructure and geographic proximity to major European markets. My goal is to direct attention of as many Finnish business ventures to Hungary as possible.

Which kinds of plans you have to further develop the business cooperation between Hungary and Finland – do you have any special sectors in mind?

Nuclear industry is an important sector for both countries. Cooperation between nuclear plants in Paks and Loviisa has been very close and intense for decades now. When recently embarking on a major extension of the Paks plant with two new reactors planned, we also had in mind that a similar project is already ongoing in Pyhäjoki. But there are other promising areas of cooperation as well, including cleantech projects, food industry, health businesses, etc. In order to enhance Finnish business presence in Hungary, we will organize a bilateral business forum in cooperation with Business Finland in Helsinki on 26 November. Presentations by Hungarian and Finnish business and state representatives will be followed by ample opportunities for B2B meetings.

Something you would like to say to representatives of Finnish business about trade, investments, tourism etc?

Hungarians are very much fond of Finland and Finnish people in general. There is a special sense of proximity and friendship between the two nations and it provides excellent opportunities for Finnish business ventures to flourish in my country. Your VELJESKANSA looks forward to meet you and make profitable business with you!